YOUR PERSONAL SECURITY DETAIL IS NOT JUST A PET! 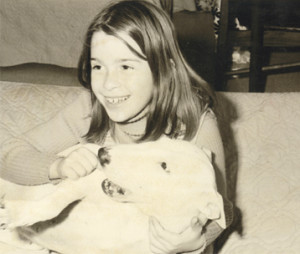 Calling your family’s life-long friend and guardian a “pet” is demeaning one of man’s closest and most ancient relationships. A relationship involving such devotion that it is not just a willingness but an instinctual obligation to sacrifice self for family. Here are two examples of what I’m talking about.
Take yourself back to 1970s Beirut, a city systematically being destroyed by bombs and gunfire from opposing factions. At that time, I had driven home through numerous checkpoints and was in my third-floor apartment on the Corniche alone with my dog, Ripper. Things had become so bad that my family had been evacuated to a secure area. A short time later, two of my co-workers had been kidnapped by terrorists and later on, the embassy had been truck-bombed in a manner similar to the later truck-bombing of the Marine barracks there.
In fact, earlier in the day while at my office the building had received concentrated gunfire from one faction on the south side and similar rounds from the opposing faction on the other side. Needless to say, the diplomatic passport in my briefcase was backed up by a .38 revolver. If one didn’t get me through, there was always hope for the other. Despite her name, the heroine of this story, Ripper, was a very people-friendly Minature Bull Terrier, weighing only about 30 pounds soaking wet. (“Bath”, incidentally was the one word that struck terror into her heart.) She was named Ripper because as a puppy she was a holy terror when it came to shoes.
On this particular evening, I saw five men coming purposefully down the hill to the apartment where I lived armed with submachine guns. I knew immediately I was the target. A fact born out by the noise of their boots tramping up the stairs and a loud kick on the door. I stationed myself to one side of the door with my revolver and a double-barrel shotgun. I had previously come from a similarly hairy assignment in Vietnam and knew that negotiations were not an option.
What none of us on either side of the door expected was that Ripper immediately jumped to the challenge. I am absolutely not exaggerating to say that her deep-throated growl was louder and far more menacing than any lion you’ve ever heard. Not only that but she threw herself clawing at the door trying to tear her was through it. Another hefty kick on the door brought even a louder and more angry roar from Ripper.
The kicks grew more timid and Ripper’s reaction even louder. Finally, I heard the shuffle of footsteps retreating down the stairs. At that point, Ripper went back to her favorite sunny spot on the living room floor and went to sleep. All in a day’s work for her.

And here’s the second heroine of this piece, a feral cat we named, Kitty. She came to us one fall bedraggled from life in the bush and badly in need of a good meal. Also, she was smart enough to know, even though still a kitten, that winter was on the way and that her chances out in the open were less than slim. I enticed her originally with a bowl of milk and later when I could go to the store with cat chow. Wariness eventually was replaced by trust and eventually when invited in she immediately crossed the room and found a very comfortable chair and went to sleep. I’m not sure that she ever felt herself adopted into the family, but more likely that she had adopted us and was therefore our protector. 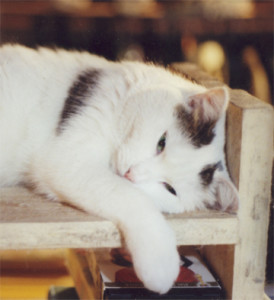 One time, while walking with me down a path in the woods, she saw a bear off to the side in the brush. She immediately hunkered down in a fighting mode and let out a deep growl. While I appreciated her willingness to tangle (presumably with me at her side) with a bear, I had absolutely no desire to go mano a mano with something that big who definitely out-classed both of us. So, I scooped her up and hastily carried her back to the house.
Her one defining moment came later. It was late at night and she was comfortably curled up in bed next to my wife. Unexpectedly, she began sniffing loudly. My wife, not at all enthusiastic about being awoken in the middle of the night, told her please to go back to sleep. Kitty would have none of it. Her sniffing became even louder. Finally, my wife was awake enough to also notice there was a very faint burning smell that our numerous smoke detectors had not yet perceived.
After turning on the lights and checking, I found that one of our off-peak, 220-watt Heaters had shorted out and that the wires were already burning—close enough to the wall to ignite a real blaze. Kitty took the resulting praise in stride, curled up and went comfortably back to sleep. All part of her job.